Free delivery on all orders

Intimacy and connection is a key part of overall wellness, however, with the rise in use of digital devices, that face to face connection can feel missing. We believe that identifying that you crave more connection in your relationship is the place to start. Read more about how love sleep pillow spray can help create the perfect environment for intimacy.

Encouraging Intimacy
We have conducted fMRI and user studies on our Love Sleep functional fragrance in order to investigate how we could use the powerful tool of aroma to help encourage connectivity and intimacy between couples.
Studies have shown that smell plays an important role in choosing a mate - if a person does not like the innate body odour of a potential partner (the way they smell in the absence of cologne, perfumes etc.) then this will likely be a deal breaker regardless of any other positive qualities that person may present.1
The findings of our fMRI study showed that the fragrance blend activated the caudate region of the brain which is responsible for emotion and romantic connection (among other things).2 Our final formulation of love sleep pillow spray also includes encapsulated Deep Sleep fragrance so that this product, as well as encouraging intimacy, helps couples to have a peaceful night's sleep.3
In our user studies we found that:
*93% fell asleep faster*
93% woke up less often*
1 in 3 had more intimate moments***
51% had more conversations with their partner in the evening**
*In a study of 200 participants with self-diagnosed sleep issues compared to no product over 7 days.
**In a user trial with 154 participants over 14 days
***In a user trial with 133 participants over 14 days
[1.] Fisher, H., Aron, A., & Brown, L. L. (2005). Romantic love: An fMRI study of a neural mechanism for mate choice. Journal of Comparative Neurology, 493(1).
[2.] Driscoll, M. E., Bollu, P. C., & Tadi, P. (2020). Neuroanatomy, Nucleus Caudate. In StatPearls.
[3.] Badre, G., Olausson, H., Ackerley, R., & Croy, I. (2018). Brain functional MRI (fMRI) study of fragrance inhalation. Any impact on sleep/wake/ reward-related brain areas? Journal of Sleep Research, 27, 164.
What is fMRI?
Functional magnetic resonance imaging (fMRI) measures the small changes in blood flow that occur with brain activity. These measurements allow us to examine the brain's anatomy and neurological wiring. By measuring the basal level of neural activity, and then, which areas are activated (shown by an increase in blood flow) by certain stimuli, such as aromas, we can link these stimuli to a certain neurological response or brain function such as memory, emotion regulation, and critical thinking to name just a few.1,2
[1.] Ambrosch, S., Duliban, C., Heger, H., Moser, E., Laistler, E., Windischberger, C., & Heuberger, E. (2018). Effects of 1,8-Cineole and (–)-Linalool on Functional Brain Activation in a Working Memory Task. Flavour and Fragrance Journal, 33(3).
[2.] Badre, G., Olausson, H., Ackerley, R., & Croy, I. (2018). Brain functional MRI (fMRI) study of fragrance inhalation. Any impact on sleep/wake/ reward-related brain areas? Journal of Sleep Research, 27.
Chemistry of Love
Oxytocin was discovered in 1835 and this small nine-amino acid peptide is now believed to be involved in a wide variety of physiological and pathological functions. The hormone stimulates the smooth muscles and sensitizes the nerves, and snowballs during sexual arousal.1,2
Oxytocin is also linked to the feeling of "closeness" since Oxytocin is released through physical touch, and it can be concluded that it is also associated with the release of other distinct hormones in the body. In fact, oxytocin works in tandem with other neurotransmitters such as testosterone & estrogen to help build intimacy and closeness between partners.3,4
Animals and humans have evolved this pathway to help build partner and family relationships for mutual survival. Production of oxytocin can be shut down or inhibited through a feedback loop of cortisol, the stress hormone, this is most notable during labour where oxytocin can help progress labour whereas cortisol inhibits it. To that end to help the production and response to oxytocin remove stress factors and ensure a favourable environment that is warm, secure, and with low light.5,6
[1.] Wudarczyk, O. A., Earp, B. D., Guastella, A., & Savulescu, J. (2013). Could intranasal oxytocin be used to enhance relationships? Research imperatives, clinical policy, and ethical considerations. In Current Opinion in Psychiatry (Vol. 26, Issue 5, pp. 474–484).
[2.] Carter, C. S. (2022). Oxytocin and love: Myths, metaphors and mysteries. In Comprehensive Psychoneuroendocrinology (Vol. 9). Elsevier Ltd.
[3.] Magon, N., & Kalra, S. (2011). The orgasmic history of oxytocin: Love, lust, and labor. Indian Journal of Endocrinology and Metabolism, 15(7), 156.
[4.] Parmar, P., & Malik, S. (2017). Oxytocin - The Hormone of Love. IOSR Journal of Pharmacy and Biological Sciences (IOSR-JPBS), 12(6), 1–09.
[5.] Fisher, H. (2004). Why we love: The nature and chemistry of romantic love. The Booklist, 100(12), 2004.
[6.] Mbugua, W. (2019). Chemistry of Love. SSRN Electronic Journal. 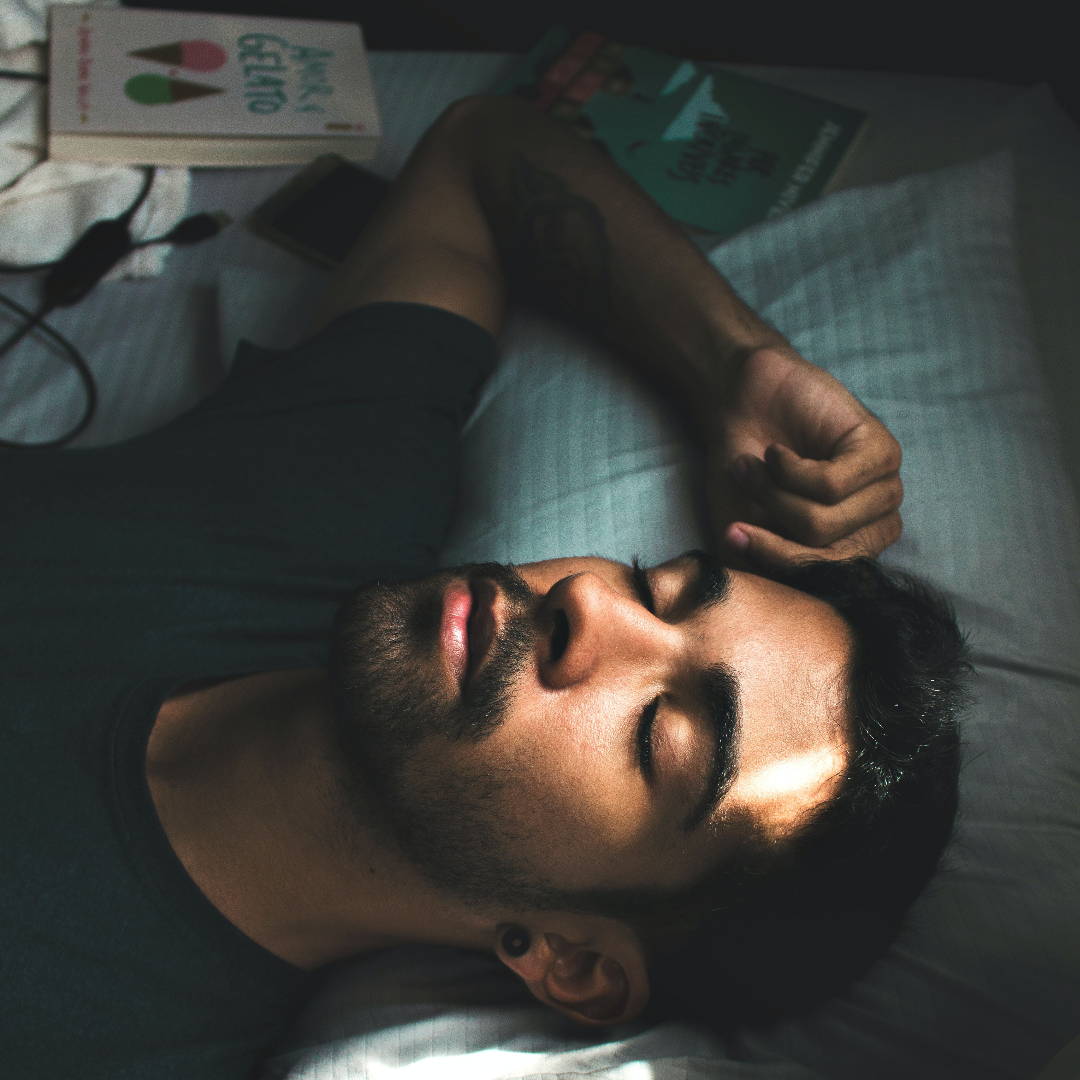 Let there be light
Light is essential for humans; it adjusts the circadian rhythm and impact on many physiological and behavioural activities such as sleep, mood, neuro-endocrine function and cognition. Increased daytime light improves alertness, mood, performance and sleep and decreased light exposure in the evening and at night can promote sleep. It is essential to keep some regularity in the intensity, timing and length of light exposure in order to not alter the biological rhythms with negative impact on sleep, health, cognition and judgments.1,2
It is thought to be important to ensure you are exposed to different wavelengths and intensities of light throughout the day to help maintain your circadian rhythm. One of the key moments is within the first 2 hours of waking, aim to get natural light into your eyes, without sunglasses, and don't look directly into the sun. The amount of time depends on cloud cover, it should be between 10-20 minutes. This triggers the timed release of a healthy level of cortisol into your system which acts as a signal to your body to wake-up boosting focus and alertness throughout the day. 3,4,5
Modern humans are more often exposed to artificial light – resulting in less light during the day, while electric lightning during the night reduces or even removes darkness. The direction of light is also important as overhead lighting can activate receptor pigments (melanopsin etc.) located in the bottom of the eye de-synchronising the circadian rhythm. Late evening light exposure inhibits melatonin release, reduces sleepiness and delays the circadian clock. Even low levels of light in the sleeping environment have been associated to impaired sleep and metabolic dysfunctions. 3,4
Light is captured in the eye by photopigments. One of these pigments, melanopsin, is sensitive to a portion of the light spectrum, peaking in the blue colour. When melanopsin is activated it conveys information to the master biological clock in the brain (the suprachiasmatic nucleus), synchronizing circadian rhythms and regulating melatonin release. Melanopsin receptors have their own circadian rhythm they are particularly sensitive during evening and nighttime hours – explaining why exposure to even small amounts of blue light at night can have an important effect in destabilizing the circadian system. Increases in LED lightning in streets and buildings (sometimes more than 50% in some European cities) with increased blue light radiation increases suppression of melatonin regulating sleep.1,2,3,4,6
Red light therapy is a term that uses both red light, with a wavelength of 600-700nm, and near infrared (NIR) that has a wavelength of 700 to 1,100nm. Both of these bands of wavelength are thought to act upon the mitochondria to stimulate ATP (the energy molecule) production. Although this would seem counter to sleep, red and NIR light has been shown to increase the production of melatonin outside of its traditional synthesis within the pineal gland. It is thought that this is related to melatonin's role in helping to protect the mitochondria from radical oxygen species.1,2
Red light has also been shown to help reset the circadian rhythm alongside its ability to increase melatonin synthesis and promote sleep.3,4
[1.] Yin, J., Julius, A. A., & Wen, J. T. (2021). Optimization of light exposure and sleep schedule for circadian rhythm entrainment. PLoS ONE, 16(6 June).
[2.] Böhmer, M. N., Hamers, P. C. M., Bindels, P. J. E., Oppewal, A., van Someren, E. J. W., & Festen, D. A. M. (2021). Are we still in the dark? A systematic review on personal daily light exposure, sleep-wake rhythm, and mood in healthy adults from the general population. In Sleep Health (Vol. 7, Issue 5).
[3.] Figueiro, M. G., Steverson, B., Heerwagen, J., Kampschroer, K., Hunter, C. M., Gonzales, K., Plitnick, B., & Rea, M. S. (2017). The impact of daytime light exposures on sleep and mood in office workers. Sleep Health, 3(3).
[4.] Marqueze, E. C., Vasconcelos, S., Garefelt, J., Skene, D. J., Moreno, C. R., & Lowden, A. (2015). Natural light exposure, sleep and depression among day workers and shiftworkers at Arctic and Equatorial Latitudes. PLoS ONE, 10(4).
[5.] Mason, I. C., Grimaldi, D., Reid, K. J., Warlick, C. D., Malkani, R. G., Abbott, S. M., & Zee, P. C. (2022). Light exposure during sleep impairs cardiometabolic function. Proceedings of the National Academy of Sciences of the United States of America, 119(12).
[6.] Preciado, O. U., Issolio, L. A., Manzano, E., Colombo, E., & Barrionuevo, P. A. (2018). Melanopsin excitation in conditions of natural and artificial lighting. Anales de La Asociacion Fisica Argentina, 29(Especial InVision).
Navigate to Previous article you are a… gift giver
Navigate to Next article you are an… anxious sleeper
Thanks for subscribing

Hey! We think you're browsing from %redirect_store_name%

You will not be able to checkout in your local currency on this store. Would you like to visit our %redirect_store_name% store instead?

Yes, take me to the %redirect_store_name% store